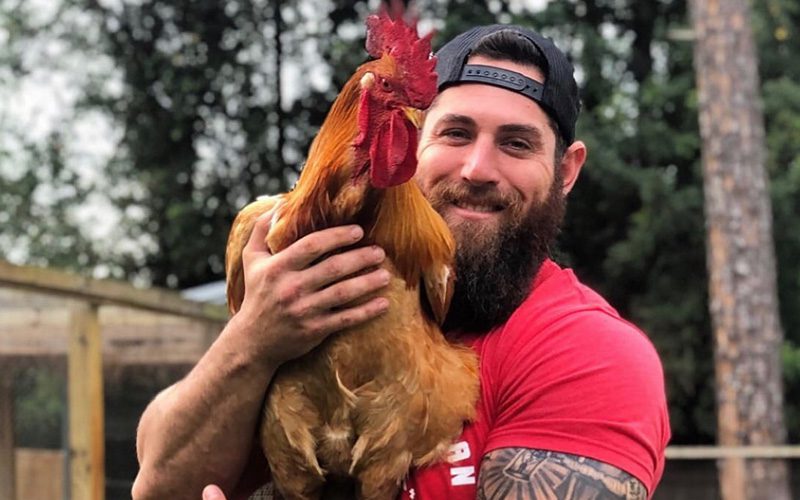 How do you approach an intimidating, heavily muscled and tattooed bodybuilder?  If you are anything like me, you shout at them from the SoFlo Vegans booth at Fort Lauderdale VegFest, run over to him while you shove people out of the way, and then drag them to your booth while he looks at you like you have two heads!!  Joking! I didn’t shove people out of the way, I did say ‘excuse me’.  That was the first meeting that I had with Conscious Muscle AKA Jordan David, who let me call him David for his first name for the longest time and never corrected me… (so embarrassed when I found out).

Jordan had been a follower of SFV, and vice-versa, for a very long time; we had been in contact through social media but had yet to meet in person.  Jordan is a vegan bodybuilder, father, entrepreneur, speaker, fitness coach and founder of Friends Not Food Rescue.  The rescue is five acres of land, a dream that became a reality last year, that had the original name of Lilly and Friends.  Who is Lilly and how did Lilly help to change a meathead culture trainer into a vegan and animal rescuer?

Alba: Hey, Jordan…emphasis on the name Jordan, I still can’t believe you let me call you David for so long!  Thank you for talking to us again, but this time we will be talking about the rescue and not so much about your personal life like we did on our podcast.

Jordan: Yeah, (laughs) I did, my pleasure, thank-you guys for making the drive up here.

In the background, in their separate enclosures, there’s Leroy the mule, next to him I can hear all the pigs and also Ragnar, a huge male turkey with amazing plumage.  As a city girl, I have not had up-close encounters with many farm animals, so I am finding them fascinating.  Leroy has eyelashes! The pigs wiggle their little curly tails non-stop and Ragnar watches every movement I make…or he could be watching my chihuahua Kona who sits on my lap during the interview. 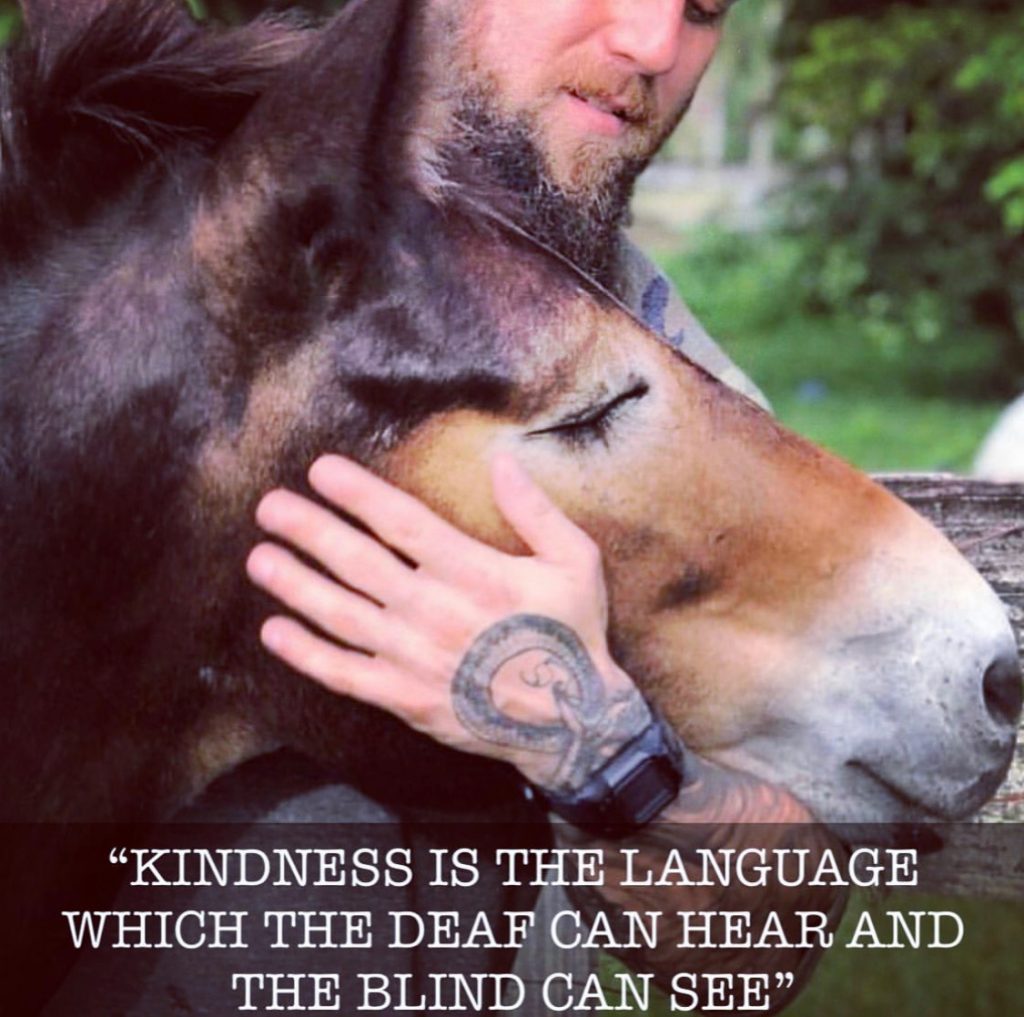 Alba: When did you get the idea for the rescue/sanctuary?

Jordan: When I became a vegan, I wanted to do more and so I did.  I dedicated my life and resources to building the sanctuary and rescuing animals.  Once I started, I never looked back.

Alba: I understand that Lily was a big driving force behind you creating a rescue, who is she?  And why did you change the name of the rescue?

Jordan: Yes, a friend of mine had mentioned to me that a farmer who had a mama pig had recently died leaving all her piglets behind.  The farmer did not want to take care of them and was looking for homes for them.  I jumped at the chance because it is a lot of work caring for piglets, they must be bottle fed every couple of hours.  She was the first pig I raised from a baby, but since we got so big, I wanted to represent all the animals at the sanctuary.

Alba: How long did it take you to get the land and how many residents do you have?

Jordan: It took me three years to save up enough money for the five acres, I put my life savings into this; much like the quote “if you want to take the island, burn the boats!” (I’ve never heard this quote before.)  I put my everything into this, knowing full well that I would realize the vision that is the Friends Not Food Rescue.  I actually have two properties that makes up the rescue, between those two properties, I take care of 48 animals.  I have some volunteers that come to help with the care, but I mostly do it on my own.

That’s a ton of animals to care for in between two properties…but Jordan assures me that he likes it like that because it gives him a chance to think. 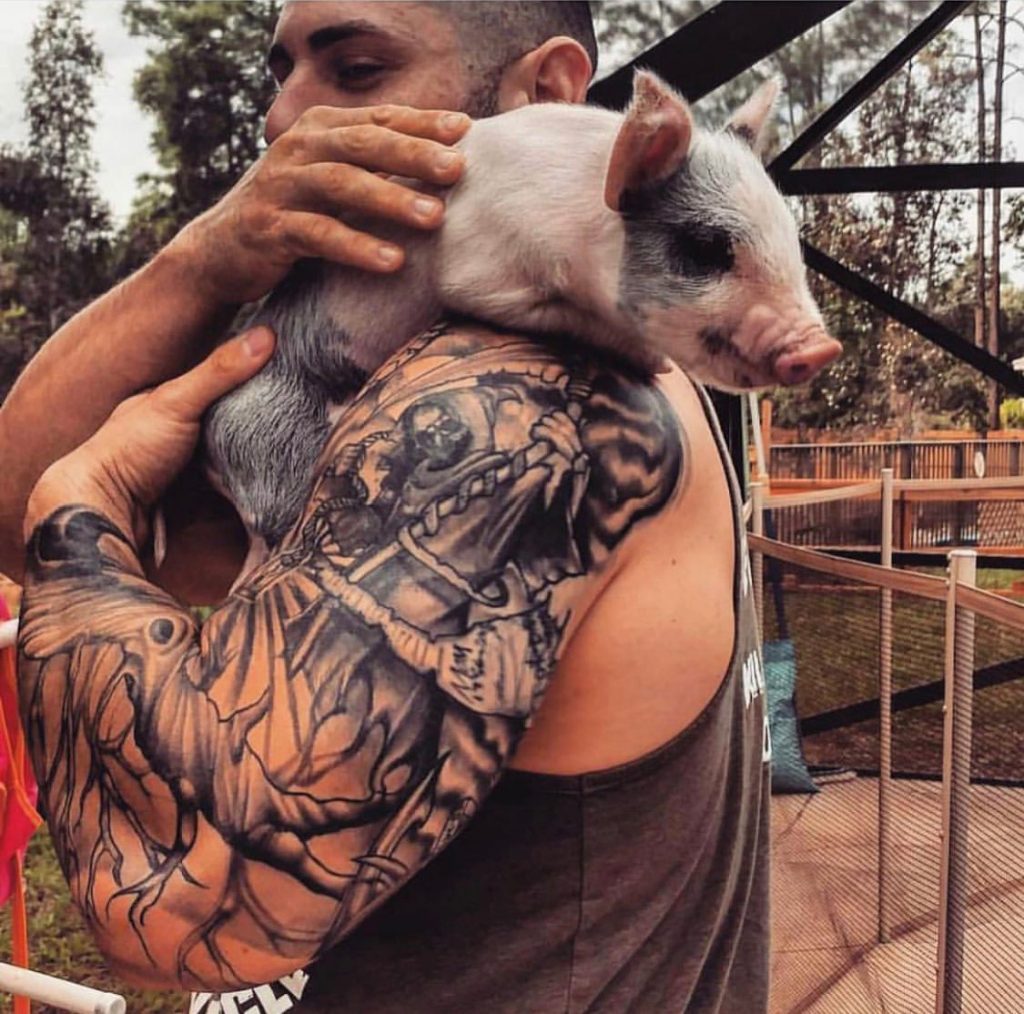 Alba: Tell me about the background of some of the animals and where they came from.

Jordan: Like I said we have a total of 48 animal, that also include my rescue dogs.  The animals range from pigs, canine, goats, one mule, ducks, chickens, roosters and the new additions, the trio of cows: Flo, Mary and Molly.  All the animals here at Friends Not Food Rescue were either rescued from slaughter, adopted from shelters or were surrenders.  Many come from horrible abuse and they come here to heal and live the rest of their lives safe and well-cared for.  The animals here are like us, they have certain likes and dislikes.  They have favorites foods that they like and foods that they do not like.  Some like their ears scratched and some love belly rubs; they all have their own personalities

I had noticed that the cow sisters love bananas and apples as treats, and the pigs love playing in the mud.  Jordan said that it keeps them cool from the Florida sun and they love belly rubs, they’ll turn on their sides for rubs, just like dogs.  FYI, pigs are more intelligent than dogs with an average intelligence equal to a three-year-old child.  This gets me thinking on a post that Jordan posted on Instagram last year in regards to the safety of the rescues.

Alba: About a year ago, there was a threat to the rescue, any threats to you and the animals since then?  Have you taken security measures?

Jordan: I have had people trolling, making comments directed towards harming my animals but I have made it very clear that coming onto my property and hurting my animals, which are my family, would be a very big mistake.  As far as security besides fencing, I have video cameras around the property and I am also capable of dismantling another human being with my bare hands.  The rescue is not a petting zoo or open to the public, we are strictly a private rescue, open by appointment only. 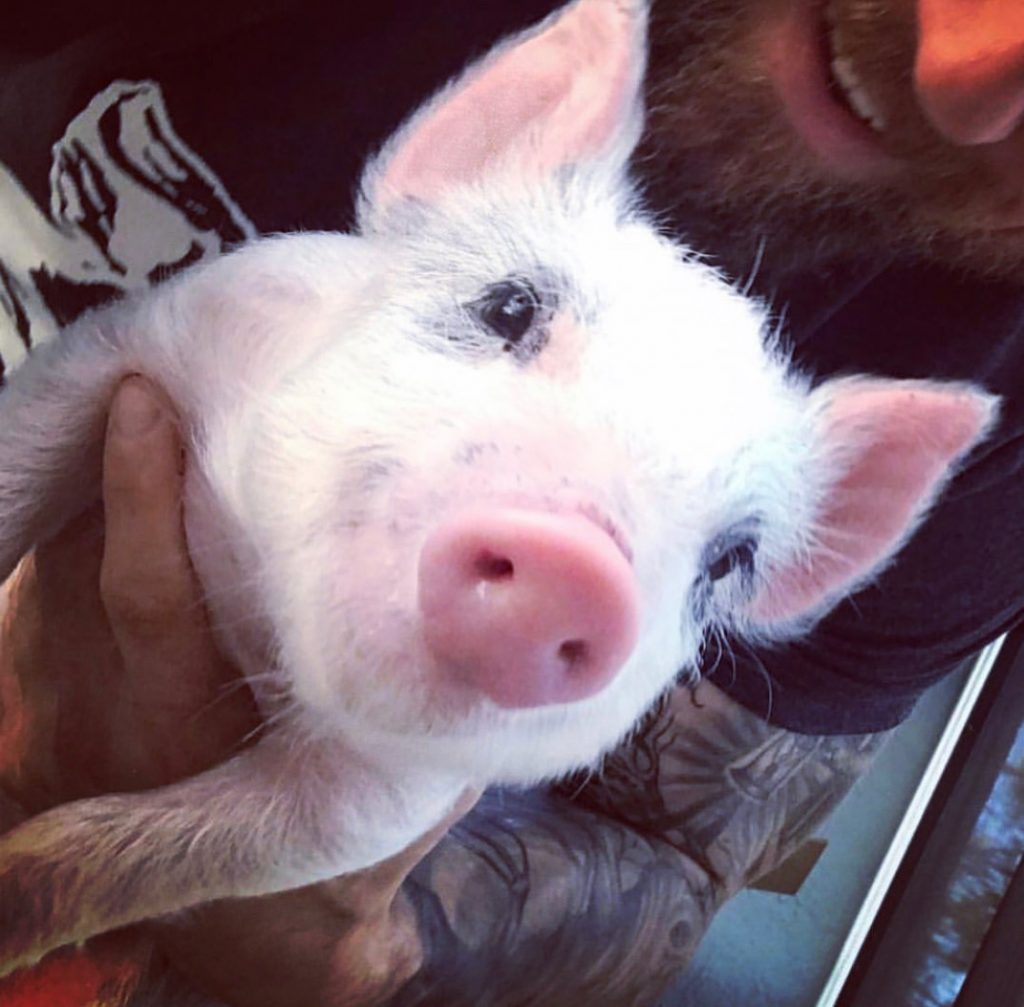 I really hope he’s joking…but then again, he is over 200lbs of solid muscle…he’ll be the vegan version of The Hulk.  He does consider these rescues his family, it might be a new concept for a lot of people, especially farmers.   I have seen many interview and memes saying that farmers care about their animals and treat them like their children.  Here is the problem, how can you slaughter or send “your child” to be slaughtered by someone else to make a profit.  I also think about the people who say that they are animal lovers but are not vegan/plant-based, it doesn’t work, that makes you a pet lover.  There is a difference, and there is no difference between a dog or a chicken, they are all friends and not food.  Many people don’t want to see the difference or haven’t made the connection yet.

Alba: Tell me a little of veganism in your own personal life.

Jordan: Veganism changed my life completely in every way.  I am without a doubt more sympathetic, empathetic and caring.  It made me understand the true connectedness between all beings.  Essentially, I came to the conclusion that the divine presence that resides within us, resides within all beings.

Alba: Makes sense, you wouldn’t be rescuing animals if you didn’t have veganism in your life; what’s your advice for people making the transition to veganism?

Jordan: Take in as much information as possible whether it be social media like IG or something like YouTube.  Get a great vegan recipe book like Thug Kitchen or hire a coach to help you make the transition like myself at consciousmuscle.net.

This is very important, transitioning to a vegan diet is not impossible, but please do your research and it starts with finding a plant-based physician who understands the lifestyle.  They are out there, plantbaseddocs.com is one site that has a list of plant-based doctors; if by chance you cannot find one, talk to your own physician.  If said physician does not want to work with you, that’s a red flag, it means he/she is only looking to profit from you staying sick.

Jordan: There is nothing manly about taking part in an industry that kills billions of billions of innocent beings a year for greed and profit.  Real men care for those who cannot care for themselves, rather than exploit them.  Men are compassionate.  Only a child would think it’s cool to be cruel.

Alba: What do you say to critics, haters or trolls who think you are a juicer?  Any challenges on you proving you are not a juicer?

Jordan: I’ve gotten this accusation thousands of times.  I have offered more times than I count to take any steroids testing under the sun.  If the accuser wants to pay for testing he can choose a lab here in West Palm Beach and I will document the whole process via social media.  No one wants to back it up, but everyone wants to make accusations throwing their own physical limitations upon myself because of their inability to push themselves hard enough to achieve results.  At this point, I just ignore it and consider it a compliment.  Never any takers so at this point I am not even paying attention.

Alba: Let’s bring it back to the rescue, it must take a lot of money to keep these animals watered and fed, not to forget their housing and vet bills.  How can people help you out?

Jordan: Yes, it does cost much, it costs about 5K a month, I do have multiple businesses, like my coaching, my supplement line, and apparel but it tends to not cover all of it, so I have a Patreon page in which people can help.  At this moment, we are not taking any more animals due to the cost, if you can’t rescue, please donate.

This is very true, some of us are not able to rescue or take care of animals.  We might not have the land, time or even the resources to do this.  If you would like to be part of this sanctuary’s journey and help with the cost of caring for these rescued animals, you can go to @friendsnotfoodrescue & click the link in the bio or use any of the methods below to contribute:

Alba Mendez is a nurse working and living in South Florida and is the Media Coordinator for SoFlo Vegans.  She can be reached at [email protected] and on social media theveg_nurse .  Follow SoFlo Vegans for more information, podcast episodes, interviews, events and giveaways. 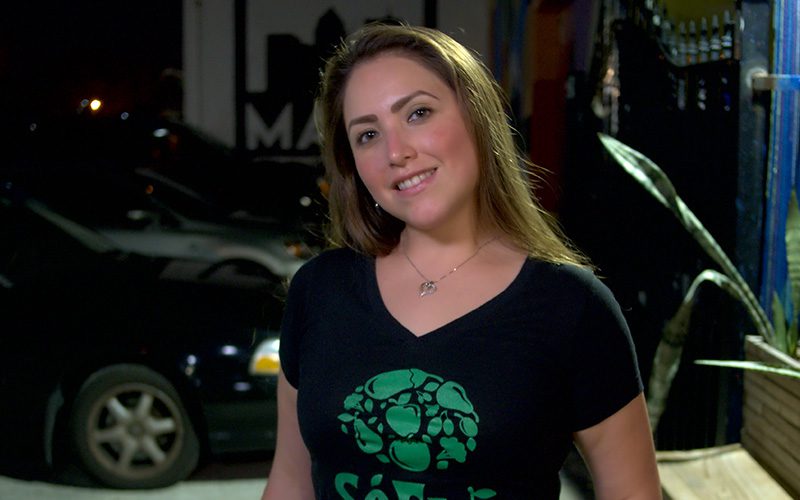