Plant Based Society at FIU presents VIP, their semi annual gala to showcase all areas of veganism 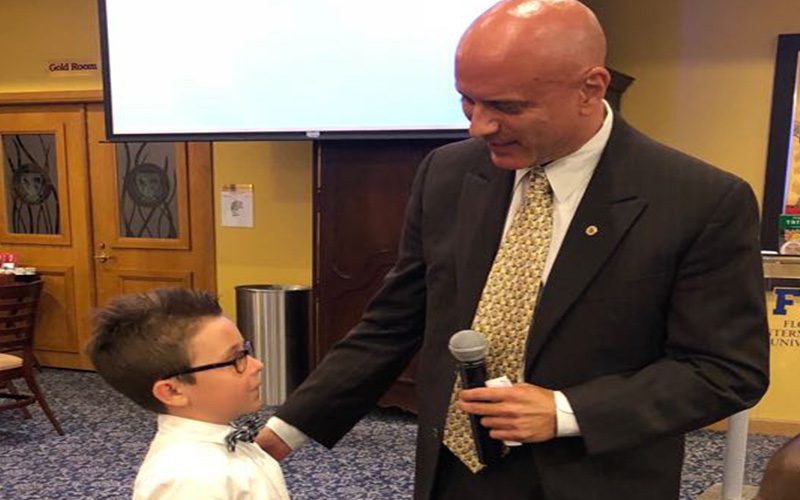 On Wednesday, April 11, 2018, the Plant Based Society at Florida International University hosted their semi-annual gala called Vegan Inspired People in the Graham Center Faculty Lounge at the MMC campus.

FIU student and founder of VIP, Roberto Castillo kicked off the night with the president of PBS, Lilian Rodicio for the second time since the club began in Spring of 2016.

As for how VIP began, Castillo eagerly said, “My friend Daniel Llosent and I came up with the name after I shared the idea with him. We thought of V.I.P. to find a solution to get free food and connect ourselves with the vegan community originally.”

Castillo explained that Llosent and him were vegetarians during that time and that by the time the first VIP event ended they were vegan.

“With our very first event, I worked with Llosent, Sarah Fiol, and my brother Eduardo Castillo. We each own a business that deals with people and improving culture. We cooked the food and found ways to originally support others. We wanted to help build the culture and a community to help people. Especially younger generations like Evan, who presented at the most recent VIP.”

Among the other eighteen people set to present this fall were FIU alumni: Monica Vega from the Miami Chronicles, Sean Russell from Soflo Vegans, and Water thru Skin blogger, Valeria Hinojosa.

“My vision for the world is a world that is compassionate, joyous, abundant and connected,” Russell said before he put down the microphone from his hand and involved everyone in meditation with noises. “This is your opportunity to be a little silly!”

Russell smiled. “That’s the spirit of all of us being connected, we are all in the room doing the same thing. That’s the idea behind Soflo Vegans. I’m not going to use the mic because I want to make sure I express my passion for the vegan community and making sure that we as a unit work together we are spreading the message any way that we can.”

Russell continued speaking, thanking everyone who came out and for the Plant Based Society for putting the event together.

“I want to thank everyone that is in the room right now listening to me speak because I wouldn’t be doing SoFlo Vegans if it wasn’t for you guys so give yourselves a round of applause.”

The purpose of Soflo Vegans is to make South Florida a global hotspot for veganism. According to Russell, Florida is already there but the world needs to see it. There are different events happening in Miami-Dade, Broward, just to name two counties. Russell loves dedicating his life to make sure other people are aware of it.

During the event, there was also a panel showcasing different vegan companies and products available in our community. Brenden Fitzerald from Planet Protein, Angelica Seader from 22 Days Nutrition, Mike Mitchell from NuGrub Vegan Food Mix, Jason Werner from Tigerseed, Lexie Lee from Flex Bites, Sonia from Dosha Cafe, Maribel Castillo from Legacy of Clean and Gabriel Lopez presented their vegan companies, showing that despite sitting with people who are business competition, the positive vibes never stopped.

When Geoff Palmer spoke during the panel to mention his company Clean Machine and the protein powders, he lifted his arm, saying “This is where I get my protein.” Smiling, he showed his fit arms, proving that vegans can grow muscle and be bodybuilders.

Picture of Tim Canova with Evan

“I went on to a plant-based diet years ago, I had been a lawyer practicing in New York City working like a dog living like a rat like a lot of lawyers and one night when I got home after work I went walking around the neighborhood to get something to eat. I did something I hardly ever did, I hadn’t done it for years: I went into a McDonalds and I got a Big Mac attack. Within two days I was in the emergency room and my appendix was being taken out,” said Canova.

This time, running as an independent, Canova asked the audience that when running for congress aware of the issues that people are becoming more aware of, where does the plant-based diet and plant-based economy come in with a progressive agenda?

“We can take a look at the kind of economy we have right now, an animal-based economy. It really is an economy of death, disruption, and despair. We have factory farms, confined animal feeding operations which Florida has a lot of them. Like all over the United States these big factory farms create an awful lot of waste.”

Waste is polluting waterways. In Lake Okeechobee, explained by Canova, algae blooms are visible and they’re from Big Agriculture, Big Farming, Big Sugar companies. There aren’t enough environmental regulations and enforcement, and these companies are very powerful politically. Canova’s campaign has been focused on not accepting any corporate money, starting a grassroots movement.

“Get away from them. Why? Get organic. It’s as if organic and vegan means you’re in the clear, or just vegan seen as an ultimate security clearance to use that you’re protected by everything but you’re not. What we’re dealing with are monster industries that have created something that has sneakily gone into our food system,” said Grant.

GMO’s are a slicing of DNA, according to Grant. Bacteria produced in a specific toxin is forced into plants and when they grow, the plants are resistant to certain pesticides and herbicides so the plant will grow. Monsanto and other companies spray the pesticides anyway.

Grant is also a part of Anonymous for the Voiceless here in South Florida, a street activism group dedicated to converting people to veganism.